Compliance In Focus
Posted by John Lehmann on Tue, Sep 3, 2019

As we’ve seen in the history of clinical research, the most significant patient safety failures are often the driving force behind tighter regulations.

The notorious World War II experiments led to the development of the Nuremberg Code and the Belmont Report.

And the PIP Breast Implant Scandal, along with other medical device failures, triggered the new EU requirements for medical devices and in vitro diagnostic devices.

One of these was the widespread failure of metal-on-metal hip replacements.

Here’s a closer look at what happened and how the EU requirements are changing as a result.

Why Did So Many Metal-On-Metal Hip Replacements Fail?

Over the past two decades, there have been thousands of lawsuits related to metal-on-metal hip replacements from at least seven major medical device manufacturers.

While all artificial hip implants have the potential for the material to become worn, metal-on-metal (MoM) devices pose additional risks, according to the FDA. In MoM hip replacements, the metal ball and metal cup slide against each other during walking or running, which can cause corrosion. When this occurs, the metal releases toxic particles that have been linked to serious side effects, including memory loss, the formation of necrotic tissue and allergic reactions.

These devices were found to cause significant harm to many patients, resulting in numerous lawsuits.

One case was publicized in a recent Netflix documentary, The Bleeding Edge.

In the documentary, an orthopedic surgeon describes having a chrome cobalt hip replacement and later experiencing serious neurological issues, including tremors, memory loss and a psychological breakdown in which he vandalized a hotel room.

He tested his own blood and discovered the amount of cobalt in his system was 100 times greater than normal due to the disintegration of the joint replacement.

How Did Regulatory Agencies Respond?

Several manufacturers of MoM hip replacements have issued voluntary recalls, while others have settled for a combined total of at least $2.2 billion.

These devices have historically been cleared through the FDA’s 510 (k) program, which allows medical device manufacturers to earn approval of devices determined to be “substantially equivalent” to existing ones without conducting new research on human subjects.

Although they are still on the market, regulatory agencies around the world have taken several steps to minimize health risks. For instance:

Most notably, in 2012, the European Safety Commission issued a final opinion

concluding that all types of MoM hip replacements may lead to adverse health effects, but large-head MoM should be avoided due to having the highest risk factors.

As promised, the EU released the new Medical Device Regulations (MDR) in April 2017.

The EU regulation “aims to ensure the smooth functioning of the internal market as regards medical devices, taking as a base a high level of protection of health for patients and users, and taking into account the small-and medium-sized enterprises that are active in this sector.”

It “sets high standards of quality and safety for medical devices in order to meet common safety concerns.”

The new regulations have a wider scope, requiring data-based evidence for both new and existing medical devices.

Two of the most significant changes include requirements for post-market surveillance of devices once they are on the market and new data reporting requirements.

While these new EU requirements may not have prevented the many adverse effects patients experienced following metal-on-metal hip replacements, they could have raised red flags sooner and potentially led regulatory agencies to respond more quickly.

To learn more about the new EU requirements and what you can do now to prepare for compliance, explore our interactive resource and join us for an upcoming webinar at 2 p.m. EDT Sept. 18. 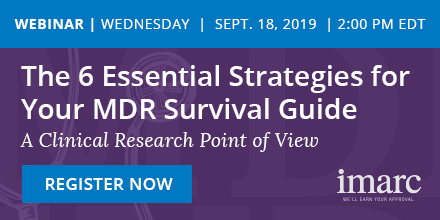